The Brain, the Criminal and the Courts 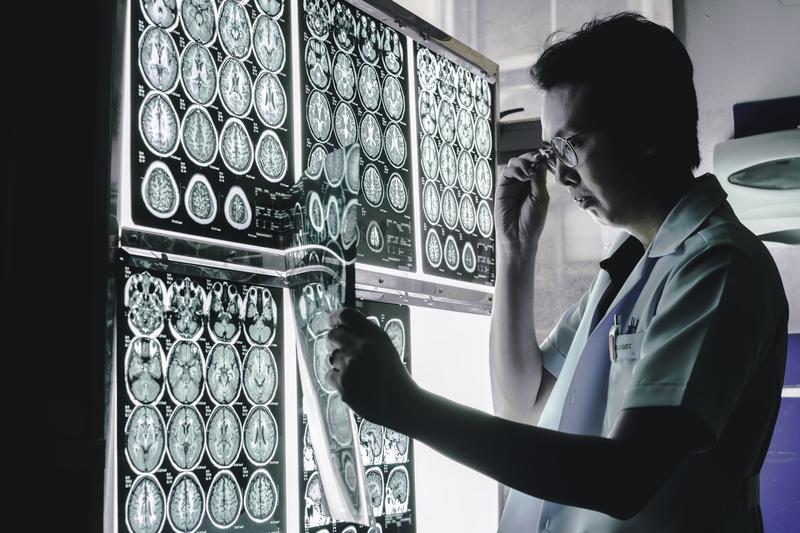 On March 30, 1981, 25-year-old John W. Hinckley Jr. shot President Ronald Reagan and three other people. The following year, he went on trial for his crimes.

Defense attorneys argued that Hinckley was insane, and they pointed to a trove of evidence to back their claim. Their client had a history of behavioral problems. He was obsessed with the actress Jodie Foster, and devised a plan to assassinate a president to impress her. He hounded Jimmy Carter. Then he targeted Reagan.

In a controversial courtroom twist, Hinckley’s defense team also introduced scientific evidence: a computerized axial tomography (CAT) scan that suggested their client had a “shrunken,” or atrophied, brain. Initially, the judge didn’t want to allow it. The scan didn’t prove that Hinckley had schizophrenia, experts said — but this sort of brain atrophy was more common among schizophrenics than among the general population.

It helped convince the jury to find Hinckley not responsible by reason of insanity.

Nearly 40 years later, the neuroscience that influenced Hinckley’s trial has advanced by leaps and bounds — particularly because of improvements in magnetic resonance imaging (MRI) and the invention of functional magnetic resonance imaging (fMRI), which lets scientists look at blood flows and oxygenation in the brain without hurting it. Today neuroscientists can see what happens in the brain when a subject recognizes a loved one, experiences failure, or feels pain.

Despite this explosion in neuroscience knowledge, and notwithstanding Hinckley’s successful defense, “neurolaw” hasn’t had a tremendous impact on the courts — yet. But it is coming. Attorneys working civil cases introduce brain imaging ever more routinely to argue that a client has or has not been injured. Criminal attorneys, too, sometimes argue that a brain condition mitigates a client’s responsibility. Lawyers and judges are participating in continuing education programs to learn about brain anatomy and what MRIs and EEGs and all those other brain tests actually show.

Most of these lawyers and judges want to know such things as whether brain imaging could establish a defendant’s mental age, supply more dependable lie-detection tests or reveal conclusively when someone is experiencing pain and when they are malingering (which would help resolve personal injury cases). Neuroscience researchers aren’t there yet, but they are working hard to unearth correlations that might help — looking to see which parts of the brain engage in a host of situations.

Progress has been incremental but steady. Though neuroscience in the courts remains rare, “we’re seeing way more of it in the courts than we used to,” says Judge Morris B. Hoffman, of Colorado’s 2nd Judicial District Court. “And I think that’s going to continue.”

A Mounting Count of Cases

Criminal law has looked to the human mind and mental states since the seventeenth century, says legal scholar Deborah Denno of Fordham University School of Law. In earlier centuries, courts blamed aberrant behavior on “the devil” — and only later, starting in the early twentieth century, did they begin recognizing cognitive deficits and psychological diagnoses made through Freudian analysis and other approaches.

Neuroscience represents a tantalizing next step: evidence directly concerned with the physical state of the brain and its quantifiable functions.

There is no systematic count of all the cases, civil and criminal, in which neuroscientific evidence such as brain scans has been introduced. It’s almost certainly most common in civil cases, says Kent Kiehl, a neuroscientist at the University of New Mexico and a principal investigator at the nonprofit Mind Research Network, which focuses on applying neuroimaging to the study of mental illness. In civil proceedings, says Kiehl, who frequently consults with attorneys to help them understand neuroimaging science, MRIs are common if there’s a question of brain injury, and a significant judgment at stake.

In criminal courts, MRIs are most often used to assess brain injury or trauma in capital cases (eligible for the death penalty) “to ensure that there’s not something obviously neurologically wrong, which could alter the trajectory of the case,” Kiehl says. If a murder defendant’s brain scan reveals a tumor in the frontal lobe, for instance, or evidence of frontotemporal dementia, that could inject just enough doubt to make it hard for a court to arrive at a guilty verdict (as brain atrophy did during Hinckley’s trial). But these tests are expensive.

Some scholars have tried to quantify how often neuroscience has been used in criminal cases. A 2015 analysis by Denno identified 800 neuroscience-involved criminal cases over a 20-year period. It also found increases in the use of brain evidence year over year, as did a 2016 study by Nita Farahany, a legal scholar and ethicist at Duke University.

Farahany’s latest count, detailed in an article about neurolaw she coauthored in the Annual Review of Criminology, found more than 2,800 recorded legal opinions between 2005 and 2015 where criminal defendants in the US had used neuroscience — everything from medical records to neuropsychological testing to brain scans — as part of their defense. About 20 percent of defendants who presented neuroscientific evidence got some favorable outcome, be it a more generous deadline to file paperwork, a new hearing or a reversal.

But even the best studies like these include only reported cases, which represent “a tiny, tiny fraction” of trials, says Owen Jones, a scholar of law and biological sciences at Vanderbilt University. (Jones also directs the MacArthur Foundation Research Network on Law and Neuroscience, which partners neuroscientists and legal scholars to do neurolaw research and help the legal system navigate the science.) Most cases, he says, result in plea agreements or settlements and never make it to trial, and there’s no feasible way to track how neuroscience is used in those instances.

The Science of States of Mind

Even as some lawyers are already introducing neuroscience into legal proceedings, researchers are trying to help the legal system separate the wheat from the chaff, through brain-scanning experiments and legal analysis. These help to identify where and how neuroscience can and can’t be helpful. The work is incremental, but is steadily marching ahead.

One MacArthur network team at Stanford, led by neuroscientist Anthony Wagner, has looked at ways to use machine learning (a form of artificial intelligence) to analyze fMRI scans to identify when someone is looking at photos they recognize as being from their own lives. Test subjects were placed in a scanner and shown a series of pictures, some collected from cameras they had been wearing around their own necks, others collected from cameras worn by others.

Tracking changes in oxygenation to follow patterns in blood flow — a proxy for where neurons are firing more frequently — the team’s machine-learning algorithms correctly identified whether subjects were viewing images from their own lives, or someone else’s, more than 90 percent of the time.

“It’s a proof of concept, at this stage, but in theory it’s a biomarker of recognition,” Jones says. “You could imagine that could have a lot of different legal implications” — such as one day helping to assess the accuracy and reliability of eyewitness memory.

Other researchers are using fMRI to try to identify differences in the brain between a knowing state of mind and a reckless state of mind, important legal concepts that can have powerful effects on the severity of criminal sentences.

To explore the question, Gideon Yaffe of the Yale Law School, neuroscientist Read Montague of Virginia Tech and colleagues used fMRI to brain-scan study participants as they considered whether to carry a suitcase through a checkpoint. All were told — with varying degrees of certainty — that the case might contain contraband. Those informed that there was 100 percent certainty that they were carrying contraband were deemed to be in a knowing state of mind; those given a lower level of certainty were classified as being in the law’s definition of a reckless state of mind. Using machine-learning algorithms to read fMRI scans, the scientists could reliably distinguish between the two states.

Neuroscientists also hope to better understand the biological correlates of recidivism — Kiehl, for instance, has analyzed thousands of fMRI and structural MRI scans of inmates in high-security prisons in the US in order to tell whether the brains of people who committed or were arrested for new crimes look different than the brains of people who weren’t. Getting a sense of an offender’s likelihood of committing a new crime in the future is crucial to successful rehabilitation of prisoners, he says.

Others are studying the concept of mental age. A team led by Yale and Weill Cornell Medical College neuroscientist B.J. Casey used fMRI to look at whether, in differing circumstances, young adults’ brains function more like minors’ brains or more like those of older adults — and discovered that it often depended on emotional state. Greater insight into the brain’s maturation process could have relevance for juvenile justice reform, neurolaw scholars say, and for how we treat young adults, who are in a transitional period.

The Jury Is Still Out

It remains to be seen if all this research will yield actionable results. In 2018, Hoffman, who has been a leader in neurolaw research, wrote a paper discussing potential breakthroughs and dividing them into three categories: near term, long term and “never happening.” He predicted that neuroscientists are likely to improve existing tools for chronic pain detection in the near future, and in the next 10 to 50 years he believes they’ll reliably be able to detect memories and lies, and to determine brain maturity.

But brain science will never gain a full understanding of addiction, he suggested, or lead courts to abandon notions of responsibility or free will (a prospect that gives many philosophers and legal scholars pause).

Many realize that no matter how good neuroscientists get at teasing out the links between brain biology and human behavior, applying neuroscientific evidence to the law will always be tricky. One concern is that brain studies ordered after the fact may not shed light on a defendant’s motivations and behavior at the time a crime was committed — which is what matters in court. Another concern is that studies of how an average brain works do not always provide reliable information on how a specific individual’s brain works.

“The most important question is whether the evidence is legally relevant. That is, does it help answer a precise legal question?” says Stephen J. Morse, a scholar of law and psychiatry at the University of Pennsylvania. He is in the camp who believe that neuroscience will never revolutionize the law, because “actions speak louder than images,” and that in a legal setting, “if there is a disjunct between what the neuroscience shows and what the behavior shows, you’ve got to believe the behavior.” He worries about the prospect of “neurohype,” and attorneys who overstate the scientific evidence.

Some say that neuroscience won’t change the fundamental problems the law concerns itself with — “the giant questions that we’ve been asking each other for 2,000 years,” as Hoffman puts it — questions about the nature of human responsibility, or the purpose of punishment.

But in day-to-day courtroom life, such big-picture, philosophical worries might not matter, Kiehl says.

“If there are two or three papers that support that the evidence has a sound scientific basis, published in good journals, by reputable academics, then lawyers are going to want to use it.”

Eryn Brown is a freelance writer and editor whose work has appeared in the Los Angeles Times, the New York Times, Nature, and other publications. Reach her at [email protected].

This article originally appeared in Knowable Magazine, an independent journalistic endeavor from Annual Reviews. Sign up for the newsletter.