Post-Traumatic Pals: How a Rescue Dog Taught Me Faith and Trust in Recovery 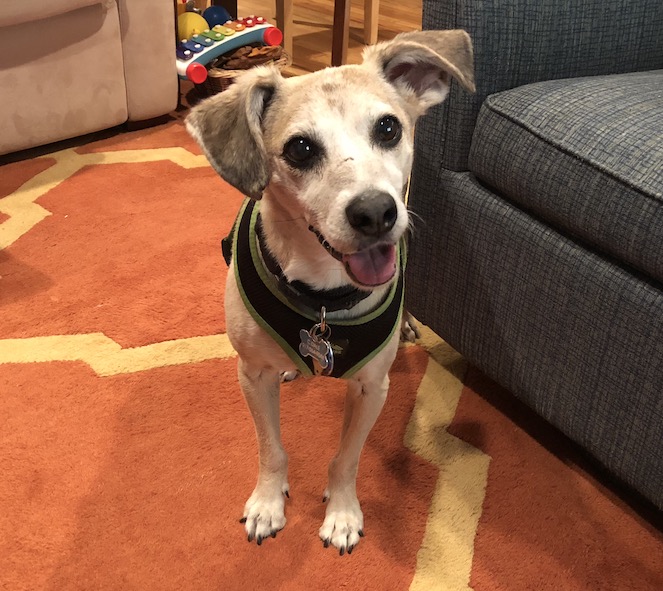 On October 10, 2011, I sideswiped a taxi while blind drunk, then sped away into the streets of Manhattan. Police tend to frown upon that; I received a night in jail, a hefty fine and a suspended driver’s license.

More importantly, I also received the precious gift of desperation. I was finally scared enough to get sober after years of steadily worsening alcoholism. Despite the disease’s discouraging statistics, I haven’t had a drink since.

I believe addiction is a takes-one-to-help-one disease. It thrives on degradation and hopelessness and, to combat both, recovery relies upon identifying with others who compulsively drank and drugged before finding an unlikely solution. That solution is one another: a bunch of former fall-down drunks who went from doomed to deliverance, and whose experiences in addiction and sobriety are invaluable to fellow sufferers.

My dog, Vector, is a more traditional form of rescue. He is alive by the scarred skin of his mauled-off tail and the saint-like kindness of the Sato Project, an organization that rescues strays from Puerto Rico’s infamous Dead Dog Beach.

On an island with some 300,000 starved strays, the gaunt 22-pound mutt endured hellish Caribbean heat for about three years, competing with fellow canines for scraps and shelter from searing sun and thunderstorms. In addition to his tail, he’s missing a toe and chunks of ear. A deep wound adorns his snout.

We have both known pain, fear, hopelessness. We have both had the odds stacked severely against us. Given our histories, Vector and I could each easily be dead.

But we’re not dead. Nowhere near it. We’re here, in my spacious backyard, playing fetch in the grass and sunshine. Just a few years ago, the chances of this coming to pass were so remote they approached impossibility. The combined unlikelihoods that led us to this point make our loving relationship among the greatest miracles of my life.

But this is more than a rescue narrative, more than the understandable attractiveness a now-sober drunk feels toward a fellow redemption story, four-legged or otherwise. The bond between Vector and me extends beyond the straightforward rags-to-riches tale of two lost souls spared from the trash heap of existence.

Vector doesn’t just exemplify my past; he plays an active part in my ongoing recovery. Let’s explore why rescue dogs can be so inspiring to those recovering from alcoholism or addiction.

A Faith That Works

Whether it’s Alcoholics Anonymous or other reputable group-centric recovery program, a key tenet of overcoming addiction can be finding something greater than yourself that helps keep you physically sober and emotionally sound. Some might call this a higher power; AA, my path because it remains the most robust, accessible organization, would call it a God of one’s individual understanding.

People who aren’t religious, including me, naturally struggle with this. I will never believe in an interventionist deity who, for some arbitrary reason, chose to save me while leaving the drunk on the next barstool to drink himself to death. Recovery requires honesty, and trying to “fake it ’til you make it” with something as fundamental as spirituality is disingenuous and counterproductive. Still, my road would have been smoother had I shared the ironclad faith many of my recovery peers possessed.

Vector helped me overcome my spiritual inferiority complex. He did this with a duality that, I believe, only a rescue dog can embody.

First, there is his very existence. Given the brutal environment and his diminutive size, it seems impossible that Vector survived three years before being rescued. That island is a doggie death trap; that Vector ran this gauntlet losing only a tail and a toe is living proof that life finds a way. Vector showed me that.

Life is so resilient that ascribing to some Essence of the Universe becomes more logic than leap of faith. There are inexplicable microbes under the Antarctic ice shelf. There are blind fish thriving in the lightless ocean depths. And there is Vector, who spent 1,000 days in a war zone and lived to bark about it.

But it was Vector’s rapid rise from frightened to frolicking that placed this newfound faith into action.

Understandably given his past, when I first adopted Vector he was a shaking nervous wreck, too shell-shocked to so much as relieve himself outdoors. He spent hours on end curled up and shaking, my wife and I petting him while whispering gentle encouragement.

Two weeks later Vector was a nub-wagging, fetch-playing, full-fledged dog. He had assessed the situation and decided that these new circumstances had real potential. He was safe, fed, sheltered, loved. He was home.

Vector’s faith – ironically, his faith in me – taught me to stop intellectually fighting recovery and just recover. Group-centric recovery has gotten millions clean and sober. Trust the process and the good people you’ve met through it, and move forward one day at a time. Vector’s uncomplicated spirit showed me I was overcomplicating spirituality.

Alcoholics and addicts are, by both nature and nurture, an emotionally unstable set. Many of us have concurrent psychological conditions such as depression and anxiety. All of us have fears, insecurities, and trauma that led us to drink and drug to excess and, from there, fueled that excess into obligatory obsession. Our physical addictions are, at their root, mere symptoms of deeper emotional affliction.

When we first put away the bottles and baggies, alcoholics and addicts are piles of rubbed-raw nerve endings suddenly robbed of our anesthetics of choice. Early sobriety especially is a period of dangerous hypersensitivity. Had I let my feelings get the better of me, I would have felt my way to a bar.

Addiction wants its sufferers discouraged and disaffected. Emotional sobriety comes with patience and practice, and serves to buttress physical sobriety. The less we let life rattle us, the less likely we are to relapse.

Vector is Exhibit A for being unaffected – the emotionally mature yin to disaffected’s yang. Blessed with an animal’s amnesia, rescue dogs live in the treasured present rather than the troubled past.

Does Vector have some PTSD in the depths of his doggie brain? Absolutely. To this day he doesn’t like other dogs, the result of literally fighting for his life against fellow canines. And he hates being left alone, hinting at potential abandonment in his past.

But past that, Vector, like all dogs, is a creature of the current. And his current situation, like mine, is very, very good.

I wonder if Vector remembers any of his harrowing history. I’m unsure whether or not I would want him to. I’m not certain which is preferable: a survivor’s gratitude for the plenty of today, or the eternal sunshine of a spotless mind.

Regardless, Vector is an unknowing teacher in what for us humans is easier said than done: living in the now. This simple message is invaluable to a set of people for whom living in the past can mean succumbing to it.

“We’re here now,” his tongue-out doggie smile says, “so whatever remorse or resentment you’re harboring, let it go. Give yourself a break, and give me a treat.”

We are post-traumatic pals, two beings back from the brink of the abyss, scarred from the past but no longer scared of the future. Each day, Vector and I walk a little further from our separate hells together, leash in hand.